Textile dyes belong to Bronze Age. If we compare this to the 21st-century, these constitute an important segment of the whole business of specialty chemicals. Dyes that are used by the textile industry are now mostly synthetic. They are mostly derived from two sources namely, coal tar and petroleum-based intermediates. These dyes are marketed as powders, granules, pastes or liquid dispersions. The concentrations of active ingredients typically ranges from 20 to 80 percent. These are now characterised as new dyes and are regularly developed for meeting the demands of new technology, new kinds of fabrics, detergents, advances in dyeing machineriest, along with overcoming the serious environmental concerns posed by some existing dyes. Another important factor is the fact that almost all the products are subjected to seasonal demand and variation. Industrial textiles Dyes must rise up to meet all these new and specific technical requirements.

With the fast changing of the product profile of the textile industry, from high-cost cotton textiles to the durable and versatile synthetic fibres, the pattern of consumption of these dyes is also going through rapid changes. Now a days, Polyesters account for a major part of dye consumption. Accordingly, disperse dyes, that is used in Polyesters, are also projected to grow at a faster rate.

Classification of all the commercial textile dyes by their generic name and chemical constitution has been done by the Color Index (C.I.), a journal published by the Society of Dyers and Colorists (United Kingdom) in association with the American Association of Textile Chemists and Colorists (AATC)..

However, if we take general dye chemistry as one of the basis for classification, textile dyestuffs can be grouped into the following categories for an easier understanding

For convenience all the above dyes can be clubbed together into three categories namely:
Percentage of unfixed dye for various dye types and applications
All the dyes are not fixed to the fiber during the process of dyeing. The following Table gives the percentage of unfixed dyes for different textiles. The reactive dye that is used for cotton shows the poorest rate of fixation. As half of the textile-fiber market is cotton, the problems of colored effluents stems from dyeing cotton with reactive dyes 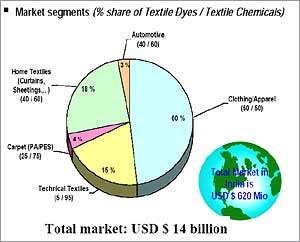 A fair impression of the importance of textile dyes can be understood from looking at the market segments, which is illustrated below: