Fluorescent dyes have the unique property of absorbing in the UV range and emitting in the visible range of the color spectrum. Each fluorescent dye has its own unique properties and used in various applications, including non destructive testing, water tracing, leak detection, antifreeze, adhesives, car wash soaps, and detergents.

There are so many types of Fluorescent Dyes. Some of them with their chemical structures is given below:

Fluorescent Dyes are different from Traditional Dyes, they not only absorbs wavelengths, but the resultant energy of this process gets dissipated in the form of yellow-green light emissions. Let's see the working process by taking the example of fluorescent yellow dye like Coumarin 7. Here the molecules of Coumarin 7 because of absorption of blue light appears yellow, consequently it also emits yellow-green light. This is depicted in the form of a graph: 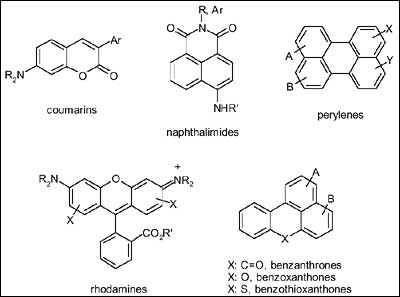 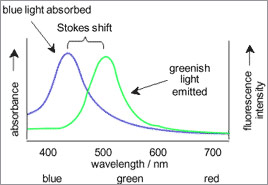 This type of light that gives supplementary emission often results into an apparent impression that more yellow-green light is transmitted or reflected than what actually falls on the dye. Thus emanating the characteristic bright glow of fluorescence. The light emitted this way is of longer wavelength than the absorbed light.
Coumarin 7 is a special Fluorescent Dyes as its yellow color because of absorption, is very well complemented by a yellowish-green fluorescence. This is best known for its special brilliant yellow-green appearance

Fluorescent Dyes are acknowledged for their unique and productive features that include: