Color Index is the most authoritative way to search your exact requirement of Dyes and Pigments from the vast range of colors available today. It is basically a compendium of dyes.

The chemical names of dyes can be very confusing and complicated. As a result of this, the practice of using names that are descriptive has arisen. In the U.K. the color Index was prepared by the Society of Dyers and Colorists, while in USA it is done by American Association of Textile Chemists and Colorists. With the advent of the System of Color Indexing, many of the confusions associated with the naming and colors of Dyes and Pigments have been effectively sorted out.

Generally a dye is referred to by a simple name that is comprehended by people who is working with them. Which we can say as a common name. But the problem is that it is not uncommon for a dye to have names that are more than one. For example take basic fuchsia which was earlier known as magenta. Another example: light green, has also been popularly used to refer to dye methyl green. Some of these names are historical or there can be cases where in order to sell a single compound different manufacturers gave different names, to avoid violating copyright or trademarks of each other.

What is a Color Index 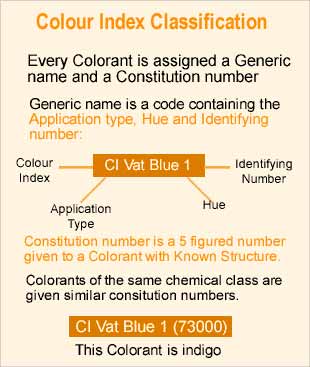 Color Index is basically a compendium of dyes, that has a huge volume of data. It was prepared in the UK by the Society of Dyers and Colorists. In the USA by the American Association of Textile Chemists and Colorists. It is available both in the book form, and on CD as well. In this reference book there is a very specific system to identify individual dyes. A five digit number is assigned to each individual chemical that is used as a dye. Consequently individual dyes get identified with reference to their CI number only. For example when specifying a dye for use in any staining method the CI number must be always provided.

The color index also has a system to assign a specific name (CI Name) for each of the dyes, to avoid any confusion regarding chemicals. The name given is totally based upon the dye's mode of behavior, base color and action. This is followed by a number. To give an example, the CI name given for chromoxane cyanine R (CI 43820) is Mordant Blue 3. Thus, the CI name therefore gives a specific way to identify a dye. Although the CI name is used less often than the CI number, the CI name is as useful in identifying a dye for a particular staining method.

Features of the Color Index

Highlights of the Color Index